the song played above is A Beautiful Diversion by Franco

It’s been years when I watched mixed bands playing passionately live on the stage, sharing the same theme to unite music lovers everywhere and to share their craft for us to make it as a part of some moments in our life (remember that thing happened then this song plays along when that memory played again inside your mind kinda thing). I can still remember the first time that my friend’s band played on that stage back in 2007 or 2008; I am starting to explore music and that time was one of my favorites…

I saw the hardships they went through just to make music, trying to be unique enhancing their signature for the audience to remember their craft. The sleepless nights to put on a good show, wasted hours having writer’s block, and restless days thinking of what’s next; are most of the things they have in mind that time, but then time is running so quickly and they need to part ways somehow since they need to manage their life according to the norms of society and the last time that played at the fair was in 2011 (haven’t seen it since I’m in Baguio that time)

… one of them (the lead vocalist) became a news field reporter at GMA 7 and my friend(the drummer) worked as an engineer in a BPO industry. –Click the link for more info -.

AND THIS IS HOW WE STARTED THE NIGHT

A good meal at

mouthwatering even after that big surprise(scroll it down and we’ll come to that topic later). See the smiles we have? That’s the smile of us having a great time having our last meal for the day. Nice place+good service wherein the price is so == to the taste and serving amount or quantity are some of the things that we check before hitting a place to it until then (keep scrolling down to see what I mean). 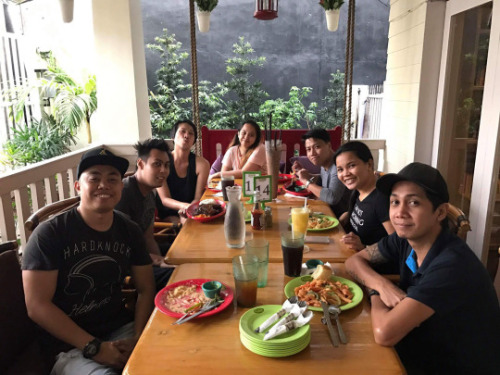 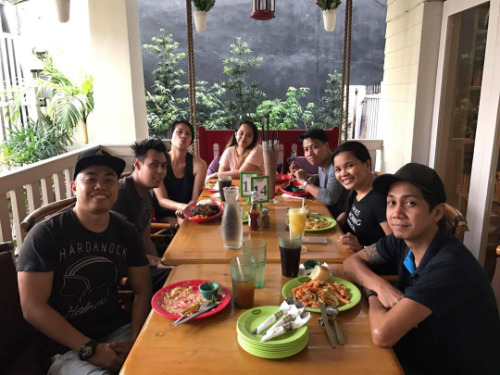 I turned this one from this

And everyone’s so satisfied and having fun like this

“God…What have I done to punish me !”

And this is how it shows up in my mind

image above is from: quora.com

But to sum it up… we left the place so full that we feel like we wanna go to sleep.

The ground feels so familiar when we got there, you can still feel the peace, though the music from the stage afar is loud somehow (

I wish that I took a picture of the big wheel, its light was still the same). All I can see are young peeps around trying to look for the old me in them… curious and trying to look cool to fit in; everyone does like… I guess that trying to fit in is still a struggle for some kids these days, the only difference is most of them have different playlist playing in their earphones. The line is still the same, long and exhausting, maybe now… but it has been the fun part back then, since, it is a good chance to meet other people, strike a joke and if it’s not funny and she didn’t laugh, then move on the next one till it clicks and shares some deep conversation later. And so we entertained ourselves till we reach the gate, the place is muddy but exciting and as the music gets louder, I smile wider… O it’s been a long time… I whispered… Then the bands played and we did our best to enjoy though it’s muddy and it sucks that we can’t move that much when the main bands started to play. Franco is different than the one in my earphone, what others don’t know about going in live is that a music’s audio quality becomes bad because of unwanted and inevitable noise around the environment but the message is clearer and free… and that is because they’re out of the cage, the studio, the label, and from our earphones; you can feel every inch of their message and they speak what they wanna let us feel.

The last band is PNE, we waited too long for the setup… everything is good and can be endured since everyone is willing to wait, but to let a bad host shows up in front of us(uhmm a bad idea)? That drained up everyone’s patience, and that, I laughed since it proved my belief that girls can be pretty but can’t be brainy and some are brainy but can learn how to be pretty. Then here they are… played their 1st song… picha pie… I was grade 5 or  6 when I first heard it and seeing their faces from afar haven’t changed that much when they show up from the cover of song hits magazines before. I’m not that much into PNE’s music but it’s been a part of my history growing up since I hear it everywhere since then. Every mud and exhaustion is so worth it since they did let us feel that everything’s cool and it’s a part of it.

Though we’ve struggled to remove dirt from our shoes… I can still say that I don’t care and it was a great night for me. I even saw that spot where Meli used to play her violin 😀 … we reached home around 3 am,, (not sure) and that’s it..

and thanks to Ish & Radny for making it possible

and to Dan,Yno, Kuya Fidel, Dr. RP, Cheska, and Jared for jamming